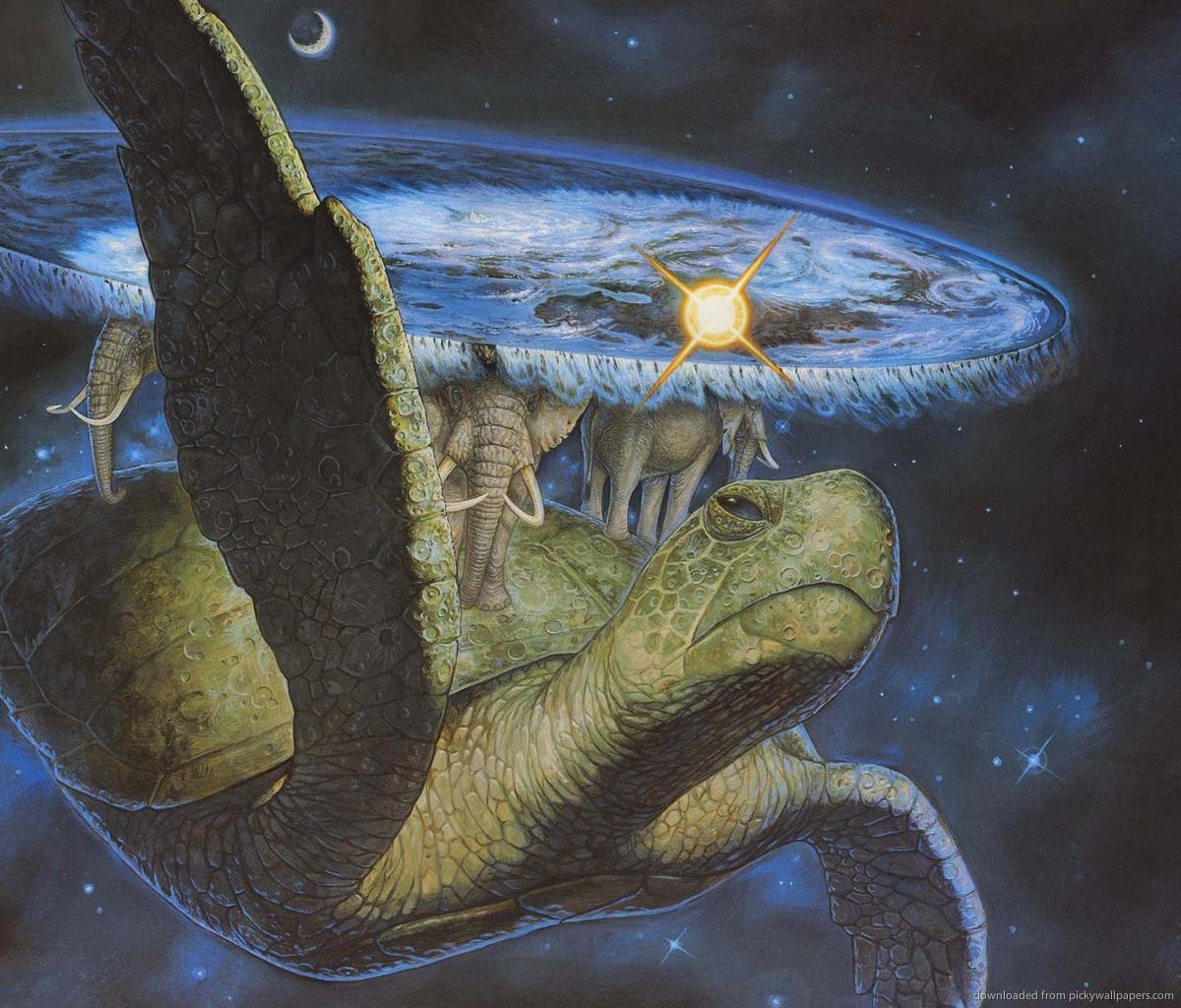 Sometimes I invite you to take a peek with me at other dimensions. There are millions and millions of dimensions out there created by consciousness to explore life.

The Fairy Tale Dimension this blog is about is a big giant plane. On this plane there are hundreds of thousands of different fairy tale countries.

There are many more dimensions where magic plays a big role and you can also meet humans: The Harry Potter Dimension is one of those. The Discworld Dimension we are visiting today is another one.

Terry Pratchett wrote 41 novels about it. His first book is called The Colour of Magic and it was published in 1983. You can see its cover in the the image below courtesy of wikipedia.  Sadly Pratchett died in 2015 at the age of 66 of early onset Alzheimer.

is formed like a round plate (See featured image). A giant turtle transports it through space. It carries four big elephants that share the weight of this world. A small sun is circling it.

In the middle of the disc it is very cold and there are 10 miles high mountains. Near the rim it is much warmer. There is an ocean and its waters flow into space in a giant waterfall.

The circumference of the discworld is 30,00 miles: It is not small. There is a net around 10,000 miles of the rim that salvages people, boats and goods. Every few miles a sentry alerts his superiors to findings by a complicated communication system made of strings and bells.

The discworld dimension is chaotic. There are gods who have fun playing chess games with their people and don´t seem to care one bit what is going on. They are hedonistic, fight against each other and like to play pranks. They remind me of the sagas of the Greek gods.

The inhabitants of the discworld are pictured as greedy, dishonest and egotistic creatures. In other words: They are interesting. They live in a pre-industrial world with a feudal governing system. Kings and gentry rule and wizards play an important role. 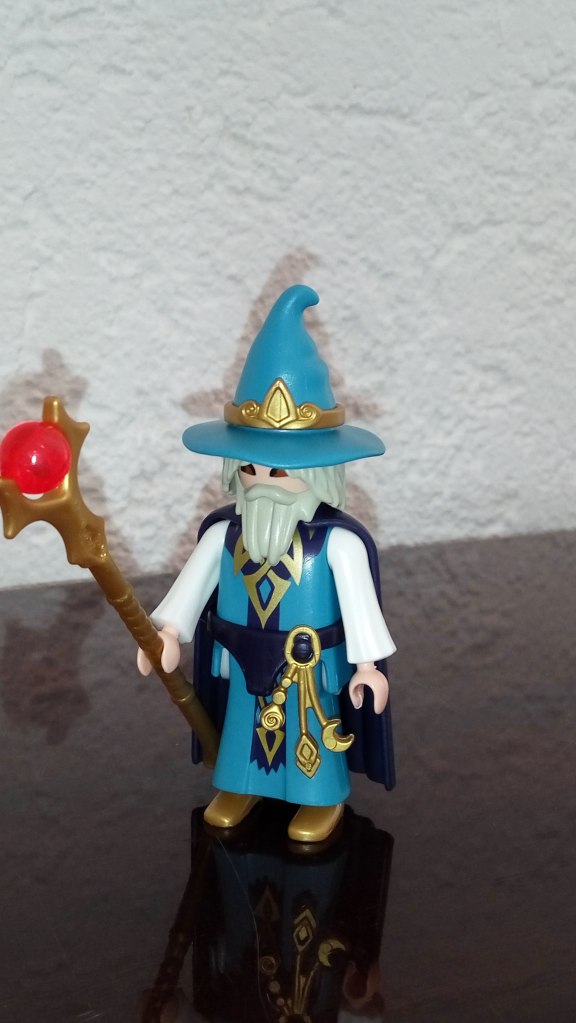 Magic on the Discworld

Magic in the beginning of the discworld was so powerful that humans and gods threatened to destroy everything in their war for power. The creators, whoever they were, intervened and reduced the magic which proved difficult. In the discworld magic behaves much like radioactive waste does here: You cannot get rid of it easily and it takes a long time to cease working.

Only wizards can see the aura of magic things and places. Magic matter is made of the magic element Octarin.

All kinds of inanimate objects can become conscious in this world: Swords, luggage and household items for example. Some magic books have to be tethered so they don´t fly away when they get scared.

Famous is the suitcase in the first two books made of rare magic pearwood that walks on hundreds of tiny legs and can find his owner everywhere. It does eat adversaries while cleaning and folding dirty laundry at the same time. Wouldn´t you want to have one of those? 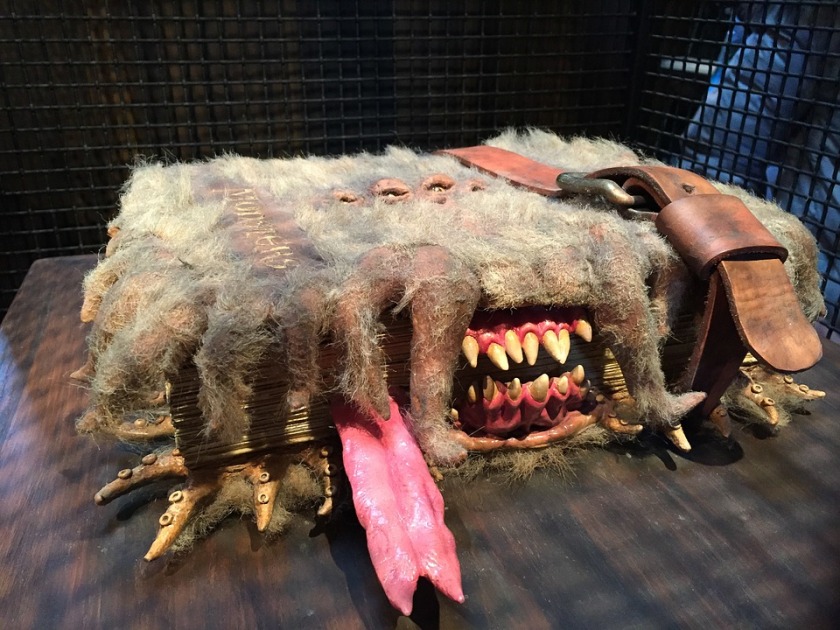 Magic is in the hands of wizards and witches. The wizards are taught at the Unseen University, a wizard school. There are some books featuring this school. Pratchett describes his wizards often as chaotic dilettantes creating havoc every chance they get.

Magic has many adverse side effects on the Discworld. This is why students of magic regularly get mad. Doing magic can attract dangerous beings from another realm who are keen to take over bodies.

This reminds me of the magic school  in the Fairy Tale Dimension that you can also only find when you are meant to find it. There are rooms for students for training magic without harming themselves and others. In the Fairy Tale dimension the gender is not an issue though. Everybody who wants to can do magic.

Witches are women and live mainly in rural areas. They teach girls to become herbalists and wise women. Witches on the Disc prefer not to use magic. They find simple and cunningly applied psychology far more effective.

In the third book Equal Rites there is a girl who is both a witch and a wizard, which results in all kinds of problems: Pratchett makes great fun of gender issues here.

One of my favourite characters is Death. He appears in almost every book. He even stars in two books: In the 5th book Mort and the 11th Reaper Man. He looks like a skeleton in a black robe who rides a pale horse called Binky. His dialogue is always written in small caps to illustrate the fact that he does not communicate by vocal cords.

Over millennia in the role, Death has developed a fascination with the people, even going so far as to create a house for himself in a personal dimension. He does not seem to have the chance to retire like in the Fairy Tale Dimension.

Death escorts people out of the dimension just like in the Fairy Tale Dimension. I love the book Reaper Man where death quits his job and starts to work as a farmer. This causes a great backlog of wizards waiting for Death walking around as ghosts and corpses creating mayhem. Why? Because only Death can escort wizards out of the dimension not his helpers.

Wizards get to be much older than the average citizen. To move up in the hierarchy it is therefore customary to kill one´s predecessor. Everything becomes even more chaotic than usual because of Death´s disappearance. A desperate search for Death sets in until he is finally persuaded to take back his job.

In the Fairy Tale Dimension you make a conscious appointment with the Grim Reaper yourself. On the Disc fate or the gods make that appointment for you. This is why people try to trick death and sometimes get away with it and living on. This often leaves Death annoyed and angry.

In the Fairy Tale Dimension you only play with Death when it is part of a fairy tale. When you change your mind about leaving you just tell him.

Inhabitants of the Discworld

A multitude of beings live on the Disc: Trolls, elves, wizards, animals and humans. Trolls are made of rock and when they die they disintegrate and turn into pebbles. There are many animals we are familiar with: Predators like wolves, bears and eagles, insects and small mammals. The difference is that magic gives some of them consciousness and creates endless opportunities for stories.

Living in trees are dryads who have earth magic and share the fate of their trees. They have a unique connection to their environment.

We can broaden our experience by tapping into other dimensions

I enjoy the playfulness that is expressed in Pratchett´s books and I am very grateful to him for taking us along on his journey into this cool dimension.

Remember, other dimensions are just as real as ours. They are not real for us because we are thankfully rooted deeply in ours. But we can use our vast consciousness to tap into other realities and thus broaden our horizons.

Did you enjoy this article? Please leave a comment and join our discussion in my facebook group The Fairy Tale Dimension.

I blog about the behind the scenes info of The Fairy Tale Dimension and invite you to join me in my discoveries. I also blog in German about my work as a healing practicioner and personal development https://blogphysioenergie.wordpress.com/ View all posts by SunnyInge

2 thoughts on “The Discworld Dimension”

What do you think? Cancel reply